5 Email Clues: You May Have a Trust Problem

We can make some straightforward observations about trust as we witness the email flowing through our Inboxes. Coworkers who trust each other use email as an extension of their healthy relationship; those who don’t will often use it as a way to protect themselves.

Often we just get a gut feeling that something is amiss; now let’s identify some specific signals that folks send through email, often subconsciously. Whether you write, receive, or are copied on it, watch for these five signs that may indicate underlying relationship, political, and/or trust issues between colleagues.

Note: for the discussion below, I’m not referring to emails intended for wide or unfamiliar audiences where the sender’s professionalism may be reflected. I’m specifically mentioning those emails between coworkers in the same work group and/or regular daily cross-team interactions.

Length
When someone “crafts” an email instead of writing it, the receiver feels like they are standing near a landmine. Colleagues who trust each other get right to the point. A strong relationship exists so neither party need worry about offending; they can be brief. By cutting to the chase quickly, the writer also conveys, “I value your time so here’s what you need to know.” By contrast, unease sets in when we get emails that take five sentences to express what can be said in two. The extra words are usually self-protective.

Back-and-Forth Chains
When the chain of internal emails goes beyond three links, it’s a good indication that people are avoiding actual conversation with each other. (Emails with specifics such as numbers or client information are the exception here.) Rather than pick up the phone or drop by the other’s desk, we pretend we are discussing a solution… when in reality we are wasting valuable time.

Trusting peers rarely do this. At the first sign of a real disagreement, one of them will do something that puts their face in front of the other person – like make a beeline to the other so they can talk it out. This is much more constructive, yields a better result, builds the relationship, and conveys how important the issue is.

Overly Formal Language
When an email reads like a legal brief instead of constructive helpful dialog between teammates, there is often a significant trust problem. If our choice of language has to be so perfect that we risk upsetting a fellow employee, we will likely fail anyway. Why? Because we all recognize a well-packaged email when we see one. They tick.

Informal, conversational, and even rushed words indicate that people are at ease with each other. Ideally, internal company emails should be simple and relaxed, reflecting an easy rapport.

Carbon-Copying (cc:) the Bosses
When colleagues carbon-copy (cc:) the boss, it is often a cry for help. There are two reasons why this behavior sends mistrust signals:

We may tell ourselves that we are merely copying the supervisor(s) as a courtesy, but we must not forget that they will likely stop doing real work to read our email… so they are already pressed for time. Once we pull the supervisor into the conversation, the chance to build trust with our peer has slipped away. 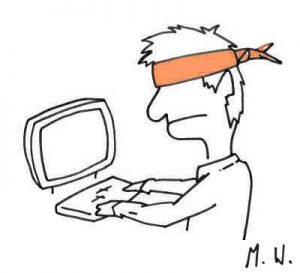 Yuk. This email behavior is almost always toxic. Mutually trusting parties rarely have reason to do this. When I am blind-copied on an internal email, I draw the following conclusions, whether they are appropriate or not. As a leader, the impact of these get multiplied.

Look for the clues above in the emails you encounter. You may be surprised to discover relationship troubles in places you didn’t expect.

Finally, when you are tempted to resort to the above behaviors, ask yourself why. It may be time to begin building or restoring trust with that person right away so that future emails can be faster, more honest, and more productive. If you or your organization need practical help in doing so, that’s what Building Trust, LLC is all about.